You will need Adobe Flash installed in order to listen to the audio files on this page.

OHQ member Leonie Jones has created an interactive documentary from 150 oral history interviews conducted with Vietnam veterans who experienced the 26 days of the Battle of Coral Balmoral.  Leonie’s PhD thesis ‘The Greatness and the Smallness of their Story’ : Developing an Oral History Interactive Documentary Creative Practice telling the Battle of Coral Balmoral, Vietnam 1968.  This war was contentious and unpopular causing our returned soldiers 50 years of silence.  This interactive documentary raises their voices by exploring the battles through the voices of the soldiers who were there.  See Leonie’s work here. 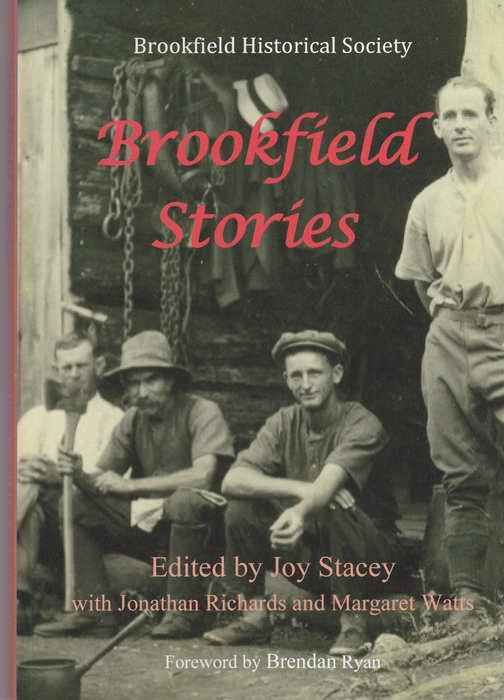 Brookfield Historical Society’s oral history project commenced in 2002.  It set out to record the life stories of the last of the local farmers.  Some of the interviews have recently been published as Brookfield Stories.  The focus has been on farming life as it developed following the end of logging.  Brookfield Stories has been accepted enthusiastically by residents and has sold well, beyond our expectations.

In a sequel it is intended to publish interviews with a wider range of residents.  In the first book there were no farm labourers, no employers of labourers and only one professional.

The focus of the next book will be a more sociological one.  We plan to examine the social disruption caused to the close-knit community when farming declined in the 1960s and 70s.  Then farmers were forced to sell land to newcomers.  The population doubled between 1950 and 1970 as whole farms and parcels of land were sold off.  We will be exploring the stresses experienced by farmers as their community became diluted with an influx of life stylers, hippies, academics and professionals and exploring also the difficulties of the newcomers trying to fit in to the community.

The Australian Generations Oral History Project is on its way to exploring the accuracy of common assumptions about the Builders (1925-46), Baby Boomers (1947-64), Generation X (1965-79) and Generation Y (1980-94), with the first of 300 interviews being selected.  Sixteen experienced Oral Historians across Australia will work with the research team to collect life history interviews with Australians born before 1990.

Researchers want to look at how demographic factors like class, gender, ethnicity, race and region interact with generational characteristics.

Project leader, Professor Alistair Thomson of the School of Philosophical, Historical and International Studies at Monash University, believes the project will fill an important research gap.

‘There is general agreement that generational differences in cultural “taste” and resources affect social change, and are significant in conflict and cohesion as well as in mobility and value transmission, but these differences and their consequences have rarely been analysed in any detail.’

The project is now completed.  To find out more click here.

This pilot oral history and digital story project aims to record the stories of four people who identify as Forgotten Australians.  Micah received a grant from the Forde Foundation and I was contracted to undertake this work given my involvement in working with vulnerable people and groups.

Micah Projects is community based organization with an unswerving commitment to social justice. It has worked in partnership with Forgotten Australians to seek justice for the abuse many experienced as children.  Micah Projects Forgotten Australians Support Services are based at Lotus Place in West End and include:
•    State-wide information and referral
•    Drop in space for individual support and group activities
•    Community education, memorials and rituals
•    Esther Advocacy and Redress Services, processing complaints through internal church and organisational processes, civil and criminal systems.
The lotus flower represents the journey from Adversity to Hope made possible through advocacy and public recognition.

The aim of this project is
•    To validate and acknowledge people’s stories.
•    To increase awareness and education within the community of what happened in the past and how we can treat our most vulnerable community members much better now and in the future
•    Acknowledge people’s resilience and their strengths and abilities

As the project develops I hope to write a short article of my journey and reflections.

This project entwines oral history with creative nonfiction writing. The latter is a genre that combines the aesthetics of fiction with the qualities of nonfiction. The oral histories were collected from a Sri Lankan family who immigrated to Australia in the 1960s. The interviews focus on their family history and their experiences during the civil war. The project is conducted by a BA (Creative Writing) (Hons) graduate with a history major, who is about to begin doctoral studies into creative nonfiction historical narrative.

This project began as an attempt to understand my heritage, but it evolved. While conducting the interviews, I knew I was hearing stories that would garner interest wider that our family, to whom they belonged. For example, my grandmother was of the highest caste in Sri Lanka. She was the ward of the mayor of Colombo, the nation’s capital, and was expected to marry as due her station. She was beautiful—Cary Grant once asked her to waltz—and wealthy, with extensive tea plantations and servants. Yet the man she fell in love with, my grandfather, was of a different ethnicity and a lower caste. In a time when status was vital and prejudice common, she was a woman of integrity and conviction. As if that were not enough, there were also stories of murder, of royalty and of war.

Three interviews were conducted, which produced ten hours of recordings. These recordings have been transcribed and are being produced in a synchronised text and audio format. A research trip to Sri Lanka led to the discovery of the ancestral home where both my grandmother and her cousin, Sirimavo Bandaranaike, the world’s first female prime minister, were born. It also included an impromptu interview with the current owner who is restoring the property, and who, as providence would have it, is a distant relative.

In 2009, I began work on a practice-led PhD project investigating how oral histories could inform fiction. The outcomes of the project will be a novel based on a number of oral histories I have conducted around Brisbane and an accompanying exegesis, investing the theoretical aspects of the project.

Throughout 2009, I conducted ten interviews with a diverse range of people about their memories and stories of Brisbane. The people I interviewed included a journalism student; an architect; a funeral director; a retired nurse; a brother and sister whose family had owned land in Newstead and Kelvin Grove for many years; a boat builder; an art teacher and a retired business man.

In conducting the interviews, I hoped to establish sense of a particular time and place. I had attended the Talk about Town: Urban Lives and Oral Sources in 20th Century Australia conference held in Melbourne from 27th to 28th August last year. Carla Pascoe, in her presentation, City as Space, City as Place, described how she used interviews to elicit sensory and emotive memories of a specific place. In her interviews, she encouraged the participants to draw ‘mental’ maps of the area as they knew it as children. Like Pascoe, I planned to ask my participants to draw maps of the places they had grown up, and to take about the significance of each of the places they drew.

I also asked questions about sensory and emotional details of there memories, such as what smells, sights and tactile sensations they associated with the area.

I’m currently in the process of editing a paper on fictionalising oral history for the OHAA journal; all going well, it should appear in an upcoming isse of the Newsletter.  I am also presenting a paper at the IOHA conference in Prague in July 2010, as well as presenting a joint paper with Dr. Helen Klaebe at the Life Writing and Intimate Publics conference held at the University of Sussex at the end of June 2010. I will be taking notes, for those that can’t make attend the conferences, and will share them in a future newsletter.

For more information or interest in participating on this project, Ariella can be emailed  or by visiting her blog.

The Don Dunstan Foundation’s Queensland Chapter has started an oral history project covering key events in the lead-up to the election of Wayne Goss in 1989 as the first Labor Party premier in 32 years.  The project, Decades of Division, was inspired by the DDF Queensland Chapter’s first president, the late Tom Burns, who served as deputy premier to Mr Goss.

“Sadly Tom died in 2007 but we are determined to undertake this project as a tribute to him,” Lindsay said.  “The oral history will be based on audio and, where possible, video interviews of people with first-hand knowledge of the key political trends and events from 1969 to 1989. The project is intended to cover the period beginning shortly after the August 1968 selection of the late Sir Joh Bjelke-Petersen as then Country Party and later National Party state premier, and ending prior to the December 1989 election of the Goss Government.  We have drafted a list of potential interviewees featuring politicians of all parties, political activists, civil libertarians, unionists and others.  All those we have approached so far have expressed great interest in participating.  Several of our members have undergone training in interview techniques and editing courtesy of our Chapter’s membership of the Queensland branch of the Oral History Association of Australia.”

Lindsay said the Decades of Division title reflected the common theme running through political events in the period covered.

“The DDF Queensland Chapter is partnering with the National Library of Australia and in July we signed a memorandum of understanding covering the conduct and funding of the project,” Lindsay said.  “All full-length original interviews will be lodged with the NLA and form part of its oral history collection.  We hope to conduct about 20 interviews over 12 months.  We will also create a Decades of Division website as part of the Don Dunstan Foundation’s website that will contain abbreviated versions of the full interviews and promote the use of interviews lodged with the National Library.  The DDF website will also host a section dedicated to Tom Burns consisting of comments about Tom by those interviewed for the larger oral history project.”

The Don Dunstan Foundation (www.dunstan.org.au) was established in South Australia in 1999 to continue the advocacy and social leadership role of the former state premier who died that year.  Voluntary DDF Chapters undertake activities in Queensland, Victoria, and NSW.

Pam Willis Burden in Port Douglas, on behalf of the Douglas Shire Historical Society, is soon to publish the sequel to her book Port’s People which featured memories of the village of Port Douglas.  The new book, with the working title of Memories of Mossman, will focus on the agricultural area of the community, centred around the town of Mossman.

Again it’s a collection of extracts of oral histories recorded with a diverse group of people such as descendents of pioneers, farmers, immigrants, the former matron of the hospital; a lady who grew up at the Daintree mission; and the men responsible for computerising the sugar mill.

The Historical Society has been awarded funding from the Gambling Community Benefit Fund to pay for the printing.

Pam believes this is the best way of sharing all these stories, publishing a small book that’s accessible to the families, local residents, new-comers to the area, and tourists.  It is a permanent record of a way of life which is quickly disappearing as the farms are divided and sold as smaller blocks and the memories of the immigrants’ children lose their links with the homeland.